As a writer of fantasy novels I can tell you that one’s identity as a writer, what they sometimes call an author’s brand, is paramount to success and important, point of fact, to all writers so don’t stop reading just because your specialty is some other genre. Every one of us has a style and a series of themes we hope to become associated with even when we don’t know it. Getting published by a company like Kellan Publishing is just the first of many steps in a long and difficult climb to the top. When a man or woman’s brand is where they should be people know what you’re about and know whether you’re worth reading but until then you’re basically a ghost.

A variety of tools are instantly at your disposal. Self-Advertising, though feeling like an incredible pain, seems to be a great tool for this sort of thing. You take command of your own destiny and don’t require being too reliant on others to help control your business of selling. It’ll be useful skill to have if your publicist decides to quit on you one day.

I’m a big believer in networking even though I’m awful at it. It’s important in every kind of job a person does in life and in the case of fantasy writing, or whatever genre you are writing in, connects you to readers of whom happen like that what you’re selling. Those who like fantasy novels and those other genres band together in groups to talk about it and you’ll want them to know you and gain interests in your novel. They have a tendency to be more talkative to others and give longer, more drawn reviews than most, and they blab about everything they read to anyone and everywhere they talk to.

I know because I’ve been a fan of George R. R. Martin for years and had long, drawn out conversations about his work and what I just know will happen in the novel that has yet to be released although I have no proof of anything. Reading and writing groups are a great way of networking because if they physically meet you chances are they’ll take you more seriously than a name on some website somewhere and you can explain to them why they shouldn’t doubt your talent when they invariably do. I’m also pretty sure if they take their reading seriously enough to meet groups in person they’ll almost certainly take it seriously enough to talk to a lot of people online as well.

Contests and giveaways actually turned out better than I personally thought they would. I sent four books copies of my novel Clan of Midnight out into the without any certainty of what would happen and someone actually gave me a rather good review. She started out negative saying the premise of fantasy plots such as mine in modern times “seemed a little contrived” but after reading it she got hooked and gave me four out of five stars. She found the main character interesting enough to keep her hooked and in the end “can recommend this highly to anyone interested in paranormal fantasy fiction.” A good giveaway guarantees somebody will get your novel and in doing so may give a review which is vital for people to take you seriously. People who will not spend money on your novel without knowing you, another reason to enhance that author’s brand, will have your novel regardless in a giveaway. People also tend to get more enthusiastic about something if they feel they’ve won it a prize. 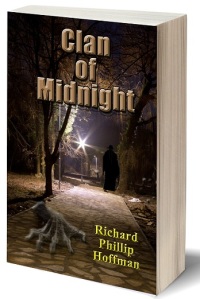 All this is powerfully important but for most of us, it takes time to create that special brand that makes people want to read us. Oh sure, some fantasy novels get picked up stupefying fast, such as J.K. Rowling whose first novel was a worldwide blockbuster hit that almost instantly came with a movie deal, but don’t let that become the standard in your mind. We are who are and very, very few us get careers that shoot off like rockets the instant we hit the market. Although for myself I’ve had admittedly great problems in this area I’ve described I have become more and more certain the path to success is this kind of post-published hard work and digging deep into any and all methods of getting that work out there, making that mark you might call it, and get the readers to know and intuitively understand what you’re about. If people know you’re writing what they want they’ll look for you and not the other way around and therein lies the finish line.

Get your copy of Clan of Midnight